Edit
watch 01:36
We're Getting Mutants in the MCU - The Loop
Do you like this video?
Play Sound

Produced by Benjy Gaither
Dorbees: Making Decisions is a computer-animated film produced by Live Bait Productions and released direct-to-video on both DVD and VHS.

The plot follows a race called Dorbees, tiny little balls that can only be seen through the lens of the most powerful microscope. Dorbees face many of the same problems as humans, such as buying appropriate clothes and listening to your parents. Jack and Mary-Jane Dorbee skip school and escape the post-columbine lockdown mechanisms their school has put into place and investigate a scary, old house, in an attempt to be seen as "grown-up". Meanwhile, Dig, a local, wealthy businessman stuck in the '70s, is visited by a Swedish immigrant named Otto who is attempting to find "clothes to fit in with the common folk" and Dig has to decide between making money by exploiting a Swedish immigrant (to get his 8-track back) or to lead Otto to a more appropriate store. The narrator is a 7-year- old, guitar playing, Dorbee named Delta Dorbee, he has several scenes and also serves to introduce the re-occurring Dorbee named Flec.

Some reasons for hatred are: 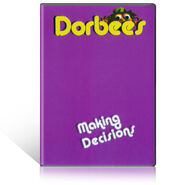 Concept art for the dorbees and parents

2nd concept art for dorbees or for reboot

Community content is available under CC-BY-SA unless otherwise noted.
Advertisement